Welcome Back ToÃƒâ€šÃ‚Â The Show.
In our last installment, we set the basic criteria and list of candidates for the Title of Gangster Bitch.
As controversial as it might sound for squares, at the end of the day, it seems as if those who do the opposite of what societyÃƒâ€šÃ‚Â presents as absolutely correct are the ones who are showing the most success.
And Yeah, yeah, plenty of debate, yet its going to all boil down to what wn individual thinks and believes anyway, so let each reap as they sow.
Chess Anyone?

Now todays focus will be on our first candidate, currently known as Public Enemy #1,
Ãƒâ€šÃ‚Â This listed photo is from her latest feature entitled
I Know Who Killed Me.
http://www.iknowwhokilledme.com

Interestingly enough, so do we, and the million dollarÃƒâ€šÃ‚Â answer to the riddle is
HATERS.
The majority of what you see in regards to “Bad Girl Behavior” coverage seems to focus on its negative effects on the self image of young women in general.Its an interesting paradox or hypocracy, considering that this exact type of behavior, whether condoned or condemend IS infact what tends to attract the most media attention, even more so than other issues such as war, poverty, homicide and other negative and miserable subjects.
Yet at the end of the day, if the goal is infact to obtain publicity
(Only Worry When They AINT TALKIN BOUT CHA),then it would appear that the loosers are winning.Is all Press really Good Press?
It would depend on who was doing the pressing.

So, the current debate tends to rest on whether or not Lindsay, and her current Gangster Bitch Behavior , is going to spell the end of her carrer.Many journalist, and influential people, are stating that her current and past previous behavior shows a threat to herÃƒâ€šÃ‚Â reliablility and credibilityÃƒâ€šÃ‚Â to perform at an acceptable level, and is costing production companies as well as studios tremendously.Morgan Creek vs. Lindsay Lohan Click HereÃƒâ€šÃ‚Â . Her latest feature, which was, interestingly enough, released one week after her recent run in with the law, has recieved poor reviews from critics over all.
Mighty Mighty PimpHop.com would then pose the question of what actually motivated any individualÃƒâ€šÃ‚Â to see the film in the first place?

So, in closing, lets see if her fall and redeem antics do her some good in the financial department, and pose this question for all in observance.
Regardless of the majority view on Lindsay and the rest of the Bad Girl Bunch, would a logical person be able to conclude that what ever her next feature is , will attract numerous patorns, for the simple fact that individuals will tend to be interested in paying attention and money to view how this individual performs on the next go around? 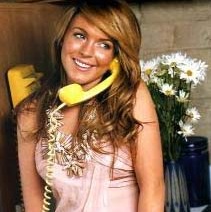 PimpHop.com:” So, Where are you now?”

LL:”At The Rehab in MalibuÃƒâ€šÃ‚Â ,Chillaxin ,Playing My Role
Like A Gangster Bitch Should.You should come by and have a few shots of Malibu Rum.”

PimpHop.com:”Sounds Like A Plan, then we can scoop you up, and we can continue the celebration at one of our secret locations that even Papparazzi Knows Nothing About. See you in a bit”
Ãƒâ€šÃ‚Â Ãƒâ€šÃ‚Â
LL:”No,Lets Let Them In, and do what works. More Pub=More Cheddar” So In Closing,
Love It Or Hate It, so Long As You Check It.
Its The PimpHop.com Way.
Better Stated—>
ROOT FOR THE BAD GIRL!!!!