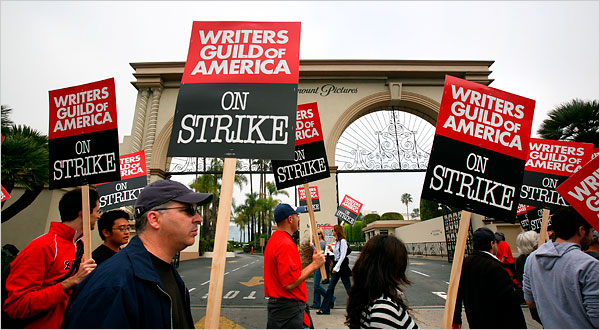 Here is an interesting article from the Associated Press.

LOS ANGELES – Striking TV and movie writers kept up the pressure on studios by picketing and intensifying an Internet campaign that uses the very medium at issue in the contentious negotiations.

Both sides were set to resume contract talks Monday. The Writers Guild of America went on strike Nov. 5 over payment for work aired on the Web. Writers want more money when TV shows and films are sold on Internet sites such as Apple Inc.’s iTunes.

Studios, networks and producers, represented by the Alliance of Motion Picture and Television Producers, say it is too early to know which business model will succeed on the Web. They want flexibility to experiment without having to be locked into payment formulas.

As the strike enters its fourth week, writers have stepped up their use of blogs, short videos, MySpace pages and other Web-based methods aimed at keeping their ranks together and reaching a wider audience, including TV viewers who will soon have to settle for reruns of their favorite prime time shows.

The guild’s West and East coast branches have posted strike schedules, press releases and other information on its official Web sites.

But soon after the strike started, other sites sprang up, including one maintained by strike captains and another hosted by writers for “Late Show with David Letterman.”

Writers also began using social networking sites, including MySpace and Facebook, to communicate among themselves. The irony of using a site like MySpace, which is owned by media conglomerate News Corp., a company being struck by writers, does not go unnoticed.

“It can’t be fun for Rupert Murdoch for me to be doing this in his back yard right now,” said Kristen Stavola, a screenwriter behind the MySpace site “Hollywood Interrupted.”

One of the most popular efforts has been the video “The Office is Closed,” which was shot on the picket lines by Peter Rader. The video features the show’s writer-producer Greg Daniels and cast members belittling a TV network claim that reuse of episodes on the Web is merely “promotional.”

That video, posted on YouTube, has been viewed more than 520,000 times.

“We realized we had the opportunity to take the Internet and use it against the companies which are trying to dominate the Internet,” Rader said.

Rader said the videos, blogs, social networking pages and other efforts constitute a “virtual picket line” where writers can communicate their position without having it filtered through the media, much of which is owned by the companies that also control TV networks and film studios.

The latest effort is a series of video featuring A-list stars such as Sean Penn, the cast of “Ugly Betty,” Holly Hunter and others.

Screenwriter George Hickenlooper and Allen Sereboff devised the campaign, entitled “Speechless,” that will eventually include as many as 50 videos.

“We’re trying to tell the world what the role of the writer is,” Hickenlooper said.

In one video, Penn silently mouths words while staring into the camera. In another, Hunter calls the screenwriter from the set of a movie, only to be connected with a clueless customer service representative in Bangalore, India.
Each video ends with the word “Speechless.”

“It’s all about bringing attention to the strike and the power of the Internet,” Hickenlooper said.

The actors donated their time in a show of unity that many believe helped bring both sides back to the bargaining table.

The other major factor was the refusal by show producer-writers, called showrunners, to prepare episodes for airing. The near unanimous decision by showrunners to honor picket lines has forced dozens of shows to go into reruns far sooner than networks had anticipated.